It was July of 1989, the summer before the start of what I had been anticipating my

whole life—my senior year at Virginia High School. There was a detailed script to follow, and the first item on the official agenda was getting my senior pictures taken.

Even though we probably couldn’t really afford it, my parents let me make an appointment at G.W. Tucker Studios, the “it” place that all the cool kids went to for their photo shoots.  (This is not to say that I was cool by any means, but I did okay in the middle of the pack.) The studio was on the south side of Chestnut Street, the main drag of our town where we all cruised on Friday and Saturday nights, back when the police were okay with kids being there.

I gathered shoes, jewelry, and props. I planned out who would pose with me (my friend, my dog, my brother, and all of my stuffed flamingos). I wrote out a list of poses I had to have and for whom. I got my hair freshly cut and permed a week ahead of time. I put neutral polish on my nails the day before. I went to sleep early and made sure I woke up with enough time to do all of the necessary primping (especially my bangs). Everything had to be perfect to craft the perfect image to kick off my perfect senior year.

I sat there nervously as Gerry adjusted the lights just so and thought about a movie I had seen in which a nervous girl who was also new to modeling was encouraged to “make love to the camera.” I didn’t know the first thing about what that really meant, but I decided that I needed to look at that camera and smile every smile for the boy I was dating (long-distance) at the time.

The boy I thought I was going to marry someday. The boy who made my stomach flip and sent me yellow roses. The boy who wrote me the sweetest letters and the made the best mix tapes. The boy who had come all the way from central Minnesota through a snowstorm to take me to my junior prom. I was his “Lady in Red,” as the mixtapes proclaimed, so I wore a red dress with red shoes with bows on them.

Gerry and I hit it off that day (as I often did with adults, being the youngest child with only child tendencies of older parents). He liked me enough to hire me for the rest of the summer to help out around the studio. I starting out as the person who vacuumed the teal shag carpet with a monstrous red Kirby and later rose to the position of tie straightener and flower children wrangler at some of his weekend wedding shoots.

I soaked up Gerry’s lessons about his craft, watched his assistant Rosemary do the important work of retouching photographs, and helped out as much as I could. There was a calm rhythm to the shop right there in the heart of downtown, and I could hardly believe my luck to be working there—where the cool kids went.

The day came to look at my proofs—My.Senior.Pictures. My mom and I were so excited. Gerry, being the cutting edge photographer in town, had a PROJECTOR in a darkened room that he used to show his customers their much-anticipated images. Oooo! We felt like absolute royalty! Rosemary clicked through the roll, and I could hardly believe what I saw. That was me up there on the wall! The pictures were pretty darn good for a first timer!

We ordered a bunch of prints—two prints for the wall, two poses for a million wallets to exchange with friends, one for my brother, one for my friend, one for the boy who sent me roses, a set of proofs for my mother…we got everything we needed. (Well, we didn’t need the big bill, looking back. But my mother was as gleeful as I was, and I was her last child. She wanted to pull out all the stops. I really should have told her I didn’t need so many, but I didn’t. I wish I had.)

When the telephone call came that my pictures were ready to be picked up, I flew the twenty miles to town, screamed into a spot on Chestnut Street in front of the studio, and heaved open the heavy front door that had a bell on it. Rosemary pulled out the order and went through them all with me, one by one.

What do you think I focused on the most?

My belly. My Belly in Red. With the seam of my inside-out nylons showing. Right there next to my sassy hand on my hip.

Guess who didn’t get a copy of this picture, even though I was smiling coyly, just for him?

I was much too embarrassed to ask Rosemary to retouch it, even though I knew she could.

What’s sad is that when I look at this picture 28 years later, it’s still the first thing my eyes go to, even though I am WELL versed in the language of positive body image and feminism. I am also the FIRST person to tell another woman that she is so much more than her physical appearance. Why is it so hard to get yourself to believe it? Or to recognize that you should be grateful that you are healthy? Or to be glad that your parents sprung for the expensive photographer? Or to appreciate any number of other things about yourself besides the fact that you happen to have a little pooch-pooch? We women are our own worst critics, and it is such a hard habit to break.

Ah, well. My bangs look pretty good. And I AM wearing ruby slippers. 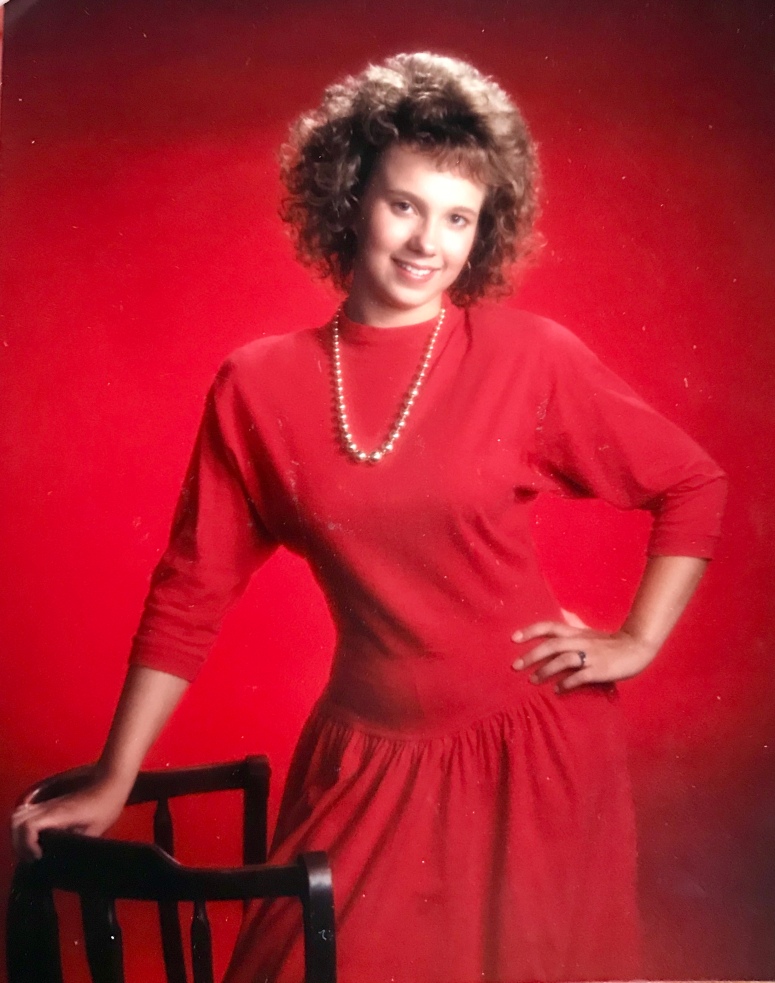